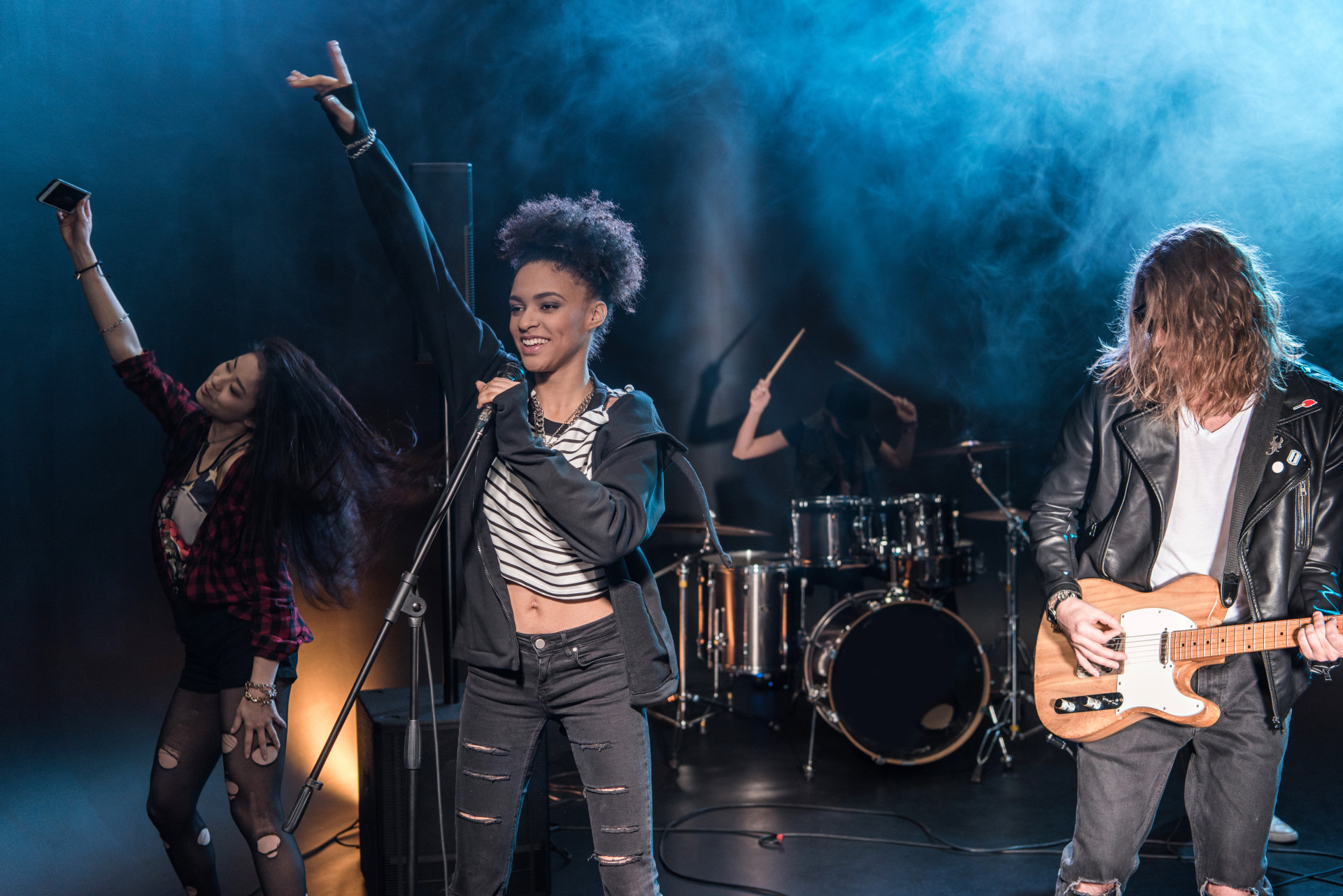 Where does the first glance of the audience go at a concert? Logically, the singer — that’s where the brightest spot of lighting technology is directed. And this is where your dreams are directed if you want to become a singer yourself. The road to get there is long for most and requires a lot of strength and perseverance. A good education is beneficial here.

Of course, the first requirement is a ‘good voice’, which can be tried out in an amateur band or a choir. Since you as a singer are often the focus of attention, you should have an attractive or charismatic appearance and, if possible, dance talent.

You have to be able to “perform.” It is also very beneficial if you can play an instrument, after all, the singer is a musician too! If you’ve also mastered songwriting, that’s an excellent plus for show business.

Thanks to Eventeus.com and its online talents and artists’ platform, you can now easily find the frontman and lead vocalists to maximize your stage presence.

What is a lead singer?

As a singer, you interpret pieces of music of all kinds. They perform the pieces solo, in an ensemble, or a choir.

They work live on stage or in the recording studio. In the stage subject as in opera, operetta, or musicals, not only vocal power but also acting talent are required to implement the director’s idea correctly.

You primarily work with managers, but you are also often involved in self-management and self-promotion. They have to organize appearances themselves, give interviews and make new contacts.

Be aware of what you can and cannot do: if you have only accompanied church services with 5-8 songs and suddenly need to help out with a cover band, where a full-length program of 50-70 songs is pending, you should only agree, if you can do it too! A lousy performance damages your reputation with fellow musicians and the audience faster and more than no performance.

Knowing what you can do is also a sign of professionalism! Incidentally, this also applies to your voice: you should know exactly which pitch range is feasible for you, where your lowest and highest notes are, which you can safely achieve, even if you don’t have the perfect day. Professional musicians will follow your wishes and prefer to play a song in a different key,

How to find lead singers?

If you don’t sing in a band anyway or perform solo as a singer/songwriter, you will already look for jobs during your training. You are sure to find enough offers on the Internet, in specialist magazines and on the notice board of the music school — good singers are always wanted! And the challenge of a caster’ audition’ should be accepted as often as possible, that brings routine and, over time, more serenity in dealing with other musicians.

Everyone has to decide for themselves whether it makes sense to apply for the casting of a TV ‘superstar’ show. The competition is fierce. Not everyone has the nerve power to expose themselves to the professionals’ hard training and derogatory comments. Ask yourself what it is worth to you, possibly to be famous for a short time, but to have a particular image for a longer time …

Networking is key to success! An old saying goes: “Talking brings people together!” It also applies to the music business!

Ask your relatives and friends whether weddings are planned. Your parents, friends, etc., will surely help you as multipliers: each of them knows other people again and can thus spread your wedding offer.

And of course, you should also contact other musicians, which is relatively easy to do when there are bands or in the various groups and pages on Facebook. Often people are looking for a singer for personal appearances!

The easiest and most efficient way to find a lead singer is to join the nest talents’ and artists’ communities such as Eventesu.com!

What does a lead singer have to do?

As a lead singer, you should have knowledge and experience of singing.

Classical singing can be studied at music colleges and universities. Either as a major or as a focus of another course of study, e.g., music education (if your great career doesn’t work out, you can still earn a living as a music teacher).

It takes a minimum of 3 and a maximum of 4 years to obtain a bachelor’s degree. It often enables direct career entry. Anyone who has the ambition to achieve managerial positions can take a master’s degree.

People who read this article also read  Find suppliers to the event industry with Eventeus.com!

The following subjects are taught:

Working as a lead singer

In general, it is, of course, easier to get to gigs by singing songs afterward: weddings, cover bands, dance music — they all concentrate on re-enacting well-known songs.

“Covering” is, however, an excellent opportunity to gain first stage experience, get into the music scene, and ultimately earn money.

If you write songs yourself and mainly want to perform with your own songs — whether alone or with a musician/band, it is much more complex, at least at the beginning — or at least paid significantly less.

As a still unknown songwriter/artist, you will not be able to avoid playing for free so that you can earn a name and an audience for yourself. In this case, it makes sense to participate in band competitions or ask cultural associations whether they want to organize a concert with you.

Whether cover or your own stuff — if you want to approach it more professionally, you can, of course, look for an agency that can mediate you. There are also small and very large ones, with some only a commission per performance is due (percentage of the fee), with others a membership fee is also due regardless of the placement.

Who are the most famous lead singers?

Nowadays, there are good singers in the charts like a dime a dozen. But to be called the best singer of all time, you need more than just a beautiful voice. Because in the end, it is the incredible success stories, unmistakable talent, and a unique voice that connect the following twenty musicians and distinguish them as the best singers in the world.

With his impressive grating voice, Joe Cocker is undoubtedly one of the best singers of all time. In 1969, he achieved his international breakthrough with his appearance at the Woodstock Festival. Joe Cocker owes this primarily to his incredibly rough voice, which made him one of the most incredible rocks, blues, and soul voices in Great Britain.

The mega-hit “Born in the USA *” made Bruce Springsteen one of the greatest rock musicians in the world several years ago. What followed were 125 million records sold. But even today, the American’s success has never come to an end: it wasn’t until the beginning of 2015 that it filled concert halls worldwide.

He laid the foundation for his music career as one of the four mushroom heads of the world-famous Beatles. Even when he was a band, he shone with his incredible talent as a songwriter, as he and John Lennon were responsible for many hits by the bands.

He is the undisputed “King of Pop” — Michael Jackson awarded himself this title but proved as one of the most incredible talents in music history that he had every right to do so. In his life, he sold more than 800 million records and managed to bring the most successful record of all time onto the market with his album Thriller.

As the band Queen singer, Freddie Mercury became one of the most famous rock singers worldwide. As the front singer, the trained graphic designer demonstrated his extravagant vocal organ, reaching a remarkable range of octaves.

Find lead singers for your band on Eventeus.com!

Are you looking for a lead singer near you or anywhere else? It is now simple and easy to find the best experts online with Eventeus.

Eventeus.com is a new and efficient online marketplace for freelancers, artists, and other talents. Online, you can now find custom solutions and a large network of talents worldwide.

As a private client, a company, or a professional, you can now easily screen talents and find the best people to join your events and parties in terms of entertainment, organization, planning, music, and more.

As a freelancer, you can now showcase your skills and services online to potential clients all around the world.

It is also a great way to connect with the competition, look at the market needs, prices … so Eventeus.com becomes your all-in-one solution and online platform.

Hire a Harpist for your events with Eventeus.com!

Find suppliers to the event industry with Eventeus.com!